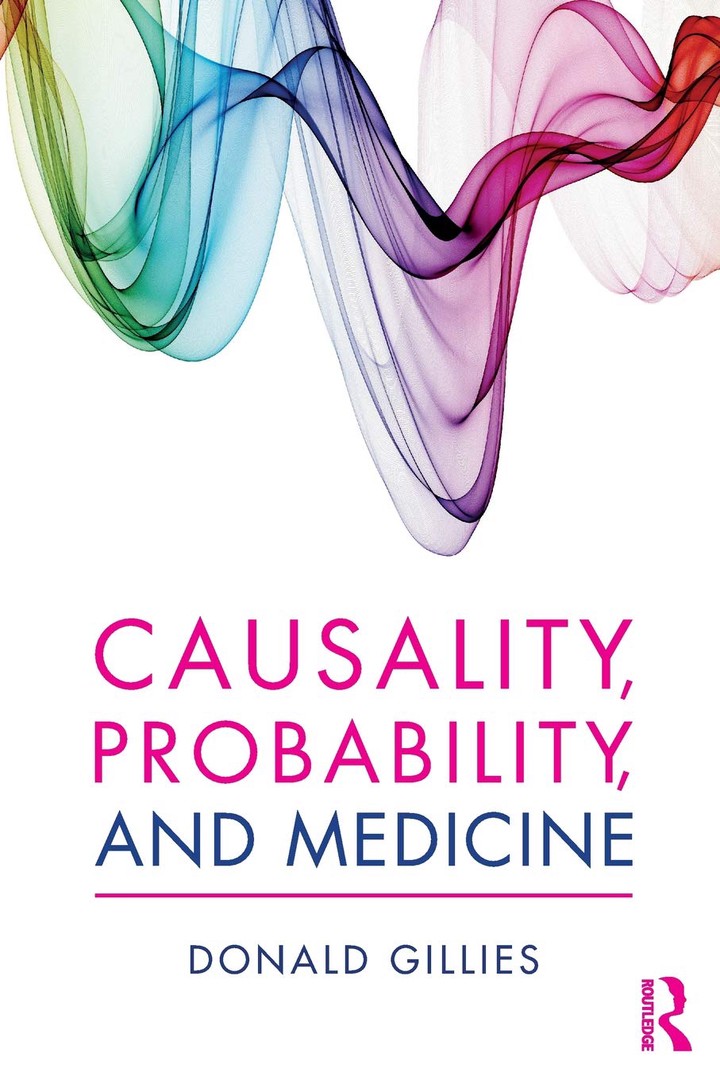 I read Donald Gillies’ book “Causality, Probability and Medicine” a while ago and wanted to give a brief comment and overview of the content. There is no conflict of interest, this blog post simply represents my personal experience. I am neither promoting the book nor have I received funding for this article.

The book provides an overview of the historical development of causality in medicine. It illustrates the history and philosophy of science by giving examples from research conducted by Robert Koch on cholera and others as well as the probabilistic causality of smoking and lung cancer. Furthermore, the book explains applications of probability and causality in medicine.

The typical proposition that is taught in statistics courses states is that correlation does not equal causation. Although one might think that causality and probability do not intertwine, they can be related. Gilles explains that one has to distinguish between deterministic and indeterministic causality. The first, and probably most commonly known, follows the Newtonian view of the world, where action equals reaction. That means whenever A occurs B follows under same conditions, e.g. a stone will fall if it is thrown from a cliff. Indeterministic causality on the other hand states, that B does not always follows when A occurs. One can think of the case where smoking causes lung cancer. Although this only occurs in approximately 5% of the cases, most people would agree that this is a valid statement.

The book only considers general causation specifically causal laws that apply in general settings rather than in specific circumstances. In that regard, Gillies presents 3 categories of the theory of causality and illustrates the approaches. Furthermore, he assesses the advantages and disadvantages of the competing theories and undermines their development with examples from history of science.

The first category is the so-called AIM-theory, that takes a deterministic approach. Here, Causality depends on Action, Intervention and Manipulation (AIM). A causes or acts on B if and only if one can intervene on A such that B changes (is manipulated).

Collingwood’s Principle of Interventional Evidence states: “A causal law cannot be taken as established unless it has been confirmed by some interventional evidence.” Objections with this theory include that in certain cases humans cannot manipulate the cause for instance that the moon causes tides. Furthermore, it should be considered that the past cannot be altered, meaning if A occurs at time T1 then B has to occur at time T2 >= T1. Another important feature is, that causality is usually asymmetrical i.e. A causes B but not necessarily that B causes A.

The second category is a mechanistic theory, that states: A causes B if and only if there exists a mechanism M, which links A to B: A → M → B. The Wesley Salmon’s dog whistle example illustrates the principle: A dog owner blows a dog whistle so that the dog arrives. To humans it seems that blowing the whistle causes the dog to come. The problem with this theory is that it relies too much on physical causality. Humans cannot hear that whistle, since its frequency is too high to be audible for humans. In medicine causal mechanisms are not necessarily physical but rather involve higher level biochemical and physiological changes. Other types of mechanisms should be allowed, for instance psychological or social ones.

In addition, confirmation and disconfirmation of causal hypothesis is equally important. To validate the hypothesis, statistical evidence and evidence of mechanisms can be used. The latter (dis)confirms correctness of a postulated mechanism, for example through laboratory experiments. Both types can furthermore be classified into observational, where a cohort for instance is simply observed without any intervention, or interventional evidence e.g. randomized controlled trials (RCT). Table 1 provides examples for the classes of evidence.

Establishing a causal link does not have to originate simply from one type of evidence. The evidence can be strengthened by combining multiple types of evidence. In some cases, certain types of evidence are not even applicable. As an example: There exists a high correlation of persons smoking and having lung cancer (observational evidence), but is there also a mechanism, that links smoking and cancer? RCTs would not be an option for additional evidence, because we can’t force people randomly to smoke.

Table 1: Examples for classes of evidence.

The third and last category is an indeterministic approach that links probability and causality. The probabilistic theory of causality dates back to Irving John Good in 1959. He understood causality in terms of propensity, i.e. things tend to happen more frequently under certain conditions. A causes B if and only if P(B|A) > P(B|~A) – This is also known as the Causality Probability Connection Principle (CPCP or CP2). So, if we would have a probability of P(B|A) = 1, we would conclude that there exists deterministic causality. There is a problem with this approach though. Let’s imagine a backyard where we can observe rain and mud (P(rain) > 0, P(mud) > 0). In that case we can also define how likely it is to rain if we observe mud P(rain|mud) and contrary if we observe rain what the chance is to also see mud P(mud|rain). The problem is that only P(mud|rain) is causal. Causality is asymmetrical, while probability is symmetrical. This raised the doubt that one can define causality in terms of probability.

Judea Pearl is a harsh critic of the probabilistic causality and suggested a different way called structural theory of causation. He devised causal and Bayesian networks in the 1980s by interpreting probabilities of causal models as beliefs. This approach is very popular among AI researchers because it provides a mathematical language that can be implemented in computers. It is criticized in other research communities due to a Markov condition (which requires random variable to be independent), which might not hold in the reality.

This should just give an overview of the scope of the book. Obviously, a lot more details would be required to understand the aspects toughly. Thus, I encourage the reader to pick up Gillies book or consult additional references.

This book provides an insightful overview about the history of science and different streams of causal theory. Most importantly, no specific knowledge of statistics, mathematics, causality or medicine is required, which makes this content very accessible. The concepts are presented in a very intuitive way, thus making it approachable to a broader audience of physicians, philosophers or computer scientists for instance. This book will not be suitable for readers who are looking for a mathematical or computational theory of causality. It is definitely educational since it gives a clear explanation of opportunities and problems of causality.