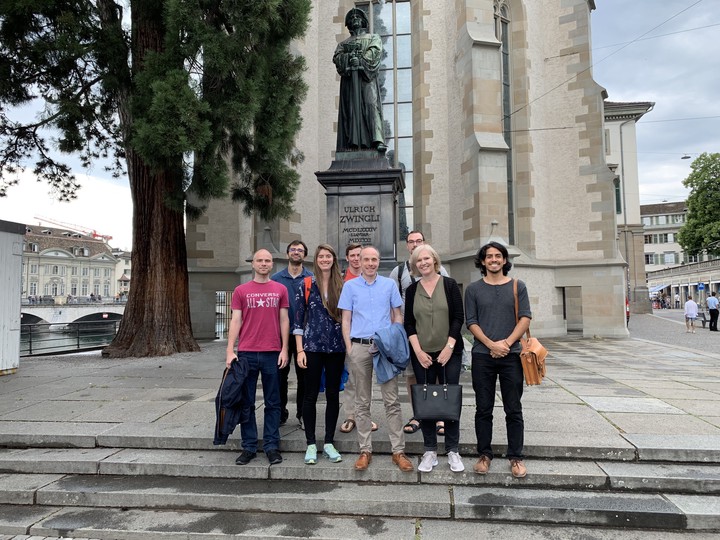 The group picture we took at the end of our tour

The first group activity of our newly founded group was to take a walk in the city we all work in and get acquainted with its history and lore.

We gathered for breakfast at the prestigious Confiserie Sprüngli at Paradeplatz (1). After everyone finished their coffees we met our tour guide Andrea, a lovely Zürcherin. She was telling us about the history of the city as she led us through the narrow alleys from the Fraumünster (2) to the ruins of the ancient Roman thermal baths (3). We marveled at the giant clockface of the St. Peter Church (4) and walked up the Lindenhof hill (5) from where we had a nice view on the old town of Zürich and the Zürichberg behind it. Subsequently, our guide took us to the police station (Waisenhaus), which does not sound like a typical sight to visit, however, the Waisenhaus is home to the Giacometti-fresco (6), which is a beautiful sight, probably not expected in a police department. The building used to be a monastery, then an orphanage (hence its name), became a town hall and now belongs to the police. We walked on along the Schipfe (7), crossing the Limmat river on the Rathausbrücke to arrive at the town hall (8). From the town hall we strolled around in the old part of the town, where our guide took us to a small exhibition which showed how the city looked like 150 years ago. We passed by the house where Lenin used to live (9) during his exile before he was smuggled back to Russia by the Germans in order to weaken the Eastern front (sorry, I meant to say in order to liberate the people of Russia from the oppression of the tsar). We took a glimpse at the imposing interior of Conditorei Schober (10) and followed our tour guide to the Grossmünster (11) where she told us about the Protestant Reformation in Switzerland. Afterwards, we bid farewell to our guide and took a selfie in front of the Zwingli statue at Helmhaus (12).

After the tour, we fled from the rain to the Restaurant Weisser Wind, where we had a lunch of traditional Swiss meals. We conversed about past travels and work experiences and the issue of environmentalism before heading back to lab. 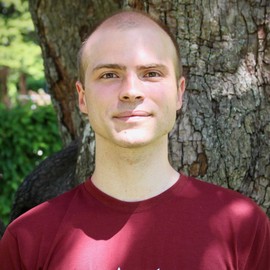